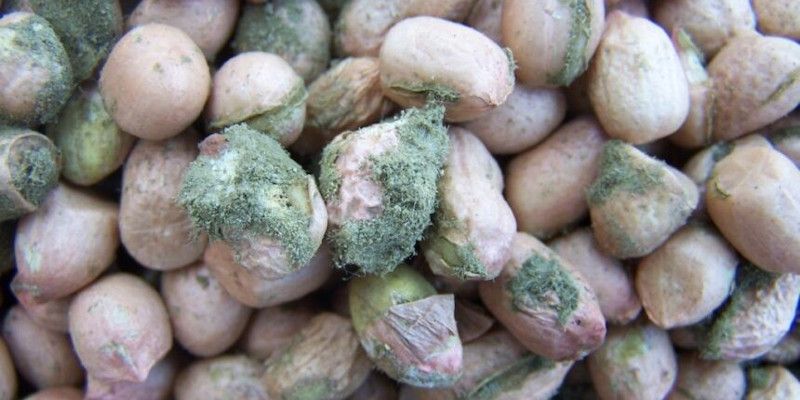 The mention of aflatoxin contamination often brings in mind maize, especially because it is this grain that is associated with food security, and therefore, receives a lot of attention. However, aflatoxin affects other value chains as well, resulting to health risks among consumers, business loss along the value chains and other negative impacts.

Aflatoxin Management and Control in Groundnuts

According to the research’s findings, a third (32%) of the value chain actors along the groundnuts value chain had encountered aflatoxin contamination in groundnuts or in the course of execution of their duties with the highest percentage (48%) in Siaya County.

While inadequate drying and storage in sub-optimal conditions were rated as the highest risk factors in aflatoxin contamination of groundnuts, poor handling of groundnuts during harvesting was also identified as a major challenge.

Aflatoxin Management and Control in Macadamia

For macadamia nuts, an average, 57% of the respondents had encountered aflatoxin contamination with Embu county recording a higher percentage than Bungoma.

Aflatoxin Management and Control in Herbs and Spices

For both Kajiado and Nakuru counties, storage was rated as the stage with the highest risk of contaminating herbs and spices with aflatoxins. Drying was also rated as a high-risk stage in the value chain, while production was rated as a low-risk stage.

Inadequate drying and harvesting herbs and spices when it is wet were identified as the greatest causes of the aflatoxin menace in the two value chains. Storage of herbs and spices in sub-optimal conditions and lack of knowledge on aflatoxins and their management were also identified as major challenges. Significantly more respondents from Nakuru than Kajiando County identified lack of knowledge on aflatoxins and their 114 management and high temperatures and drought during production as the causes of aflatoxins herbs and spices.
Respondents suggested various interventions for aflatoxin mitigation in herbs and spices value chains focussing on pre-harvest practices, post-harvest practices and handling as well as policy and regulations. Such interventions include good agricultural practices, adequate and timely drying, and raising awareness on aflatoxin contamination.

The report comes with several key recommendations on aflatoxin management and control in the groundnuts, macadamia nuts, herbs and spices value chains in Kenya, including:

Following the research findings and recommendations, MARKUP Kenya will be working with relevant stakeholders to create awareness on aflatoxin management along the value chains.