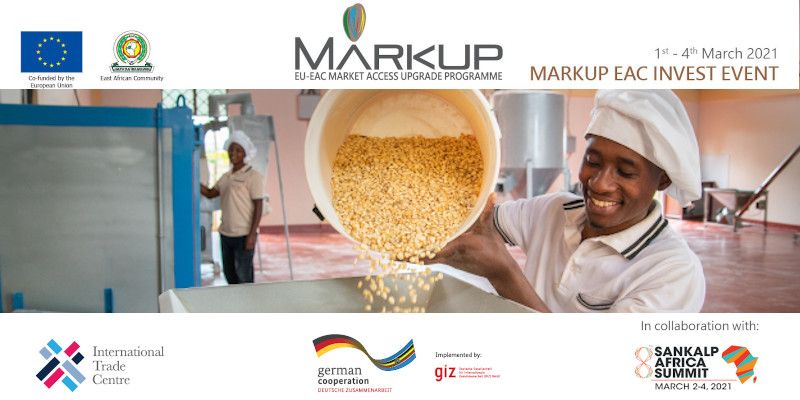 Stakeholders from across the East African Community (EAC) region and Europe gathered in the first week of March to participate in the MARKUP EAC Invest event. Participants praised the substantial dialogue during the fully virtual event and expressed optimism for the future of investment in the region post COVID-19.

More than 200 participants joined the opening  sessions , which saw high level speakers including EAC Secretary General, Amb Liberat Mfumukeko, Pamela Coke-Hamilton, Executive Director of the International Trade Centre (ITC), Cédric Merel, the Head of Cooperation at the Delegation of the European Union in Tanzania, and Prof. Nshuti Manasseh, Minister of State of Rwanda in Charge of East African Community, representing the Minister of Foreign Affairs of Rwanda and Chair of the EAC Council of Ministers. All outlined the key role of cooperation and the promise of a robust agricultural sector, which through strategic investment and infrastructure development will continue to grow and benefit the whole region. The recording of the session can be found here.
Other notable speakers sharing their thoughts at  the event were Dr Peter Mathuki, Executive Director, East African Business Council and incoming EAC Secretary General, Dorothy Tembo, Deputy Executive Director, ITC, Hon Christophe Bazivamo, Deputy Secretary General EAC, and Godje Bialluch, EAC-GIZ Cluster Coordinator and Programme Manager SEAMPEC, who echoed the optimism of the event.

A key highlight of the week was the launch of the Financing Gateway, which will serve as a one-stop-shop to help SMEs in East Africa access information to identify and connect with capital providers in the region. The event also had training sessions for financial institutions on sustainable finance, business clinics on packaging and branding for SMEs and a training series for Invest Promotion Agencies, organised in partnership with the Costa Rican Investment Promotion Agency (CINDE). All sessions were developed with a view to building skills, sharing knowledge, improving value addition, increasing exports and attracting investment for horticulture and traditional commodities from the EAC. Innovation, sustainability and highlighting investable case studies were the main  themes.The East African Community, as the world’s fastest growing trade bloc, was consistently highlighted as a prime investment destination. ITC organised a spotlight session as part of the Sankalp Africa Summit on ‘Why East Africa should be your next investment destination’ which attracted a lot of interest. Session speakers emphasised adaptability and outlined how to build a business case towards supporting the private sector in agriculture.
EAC Secretary General, Amb Liberat Mfumukeko stressed that the EAC Invest event came at a time when the whole region is trying to unlock the investment potential of enterprises and the private sector in general. 'The idea of this event contributes to the realisation of the vision of our forefathers in crafting the EAC to be private sector-driven, as articulated in Article 7 of the Treaty for the Establishment of the EAC.' He urged participants to take up all the recommendations that came up from the EAC Invest event, to foster new investments which will accelerate productivity, industrialisation and value addition and be a growing source of revenue for EAC based agri-based SMEs.

Participant and founder of Eva’s Coffee in Kenya, Eva Muthuuri, was enthusiastic about the event. 'I’ve come away with so much to think about, lots of connections with financers like USAID and capital investors I hadn’t heard of until now.'